Tor Vergata University of Rome’s Department of Physics together with the INFN – Istituto Nazionale Fisica Nucleare  (National Institute of Nuclear Physics) contributed to the missions of the ISS – International Space Station with 6 experiments which will help the astronauts in collecting important data:

LIDAL (Light Ion Detector for ALTEA) one of these six experiments on board the ISS, was started by astronaut Luca Parmitano, who departed last July with the Beyond mission of the European Space Agency.

LIDAL is a particle detector entirely designed in the Physics Department of Tor Vergata University (by the research team of prof. Livio Narici, in collaboration with Kayser Italia of Livorno) to measure the charged component of the radiation inside the International Space Station.

LIDAL was brought into orbit by the Cygnus NG-12 cargo shuttle (last November) and was built starting from the ASI ALTEA payload, which operated on the International Space Station between 2006 and 2012, expanding and improving its technical characteristics. Telespazio and the ASI – Italian Space Agency also worked on the installation of the payload.

LIDAL will remain on board the ISS for at least 18 months during which it will provide data relating to the kinetic energy of the particles and to all the physical parameters necessary for a better knowledge of the radioactive environment to which astronauts are subjected. Also it will provide a comprehensive assessment of the radiation hazard on astronauts. 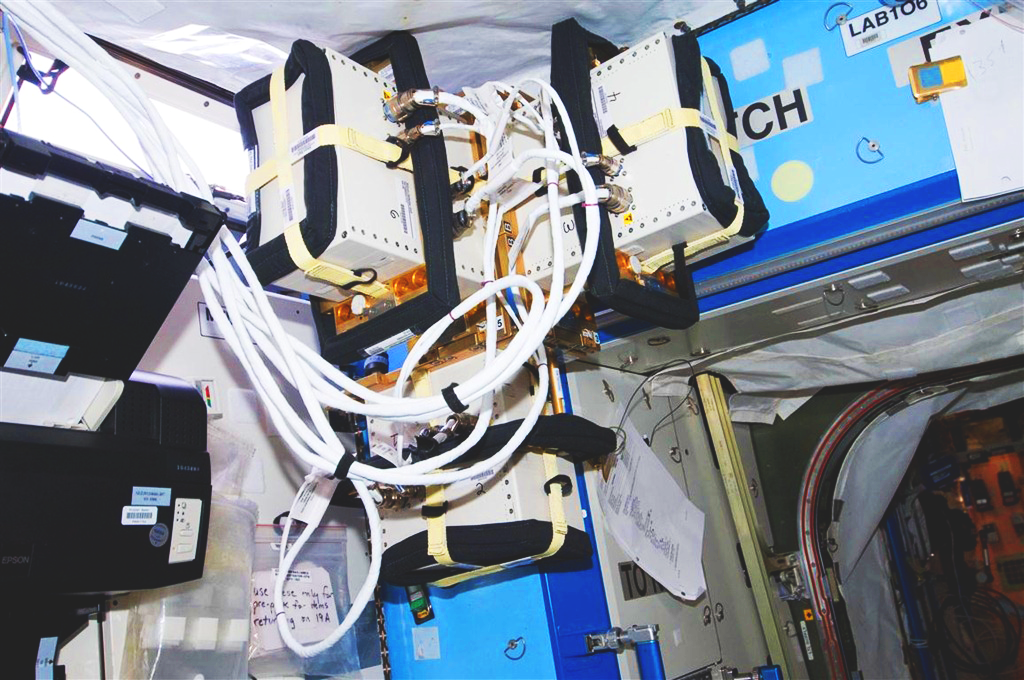 Following the hearing disorders reported by astronauts on the ISS after a few months of staying in micro gravity conditions, AUDIO assesses any damage to the auditory system by comparing the audiological tests performed on astronauts before and after the mission, and performing others during their stay in orbit.

The team of the Physics Department of Tor Vergata University of Rome led by prof. Arturo Moleti developed the necessary instrumentation for an innovative technique for the measurement of oto-acoustic distortion products (DPOAE), capable of providing an assessment of the auditory function in a noisy environment, in a fast, non-invasive way, and without the active participation of astronauts.

MiniEUSO (jem-euso.roma2.infn.it) is a compact telescope with a wide field of view, which uses a lens based on Fresnel lenses and is designed to perform observations on the emission of UV rays of cosmic, atmospheric and terrestrial origin.

Positioned in front of the window of the Russian Zvezda module of the International Space Station, it will collect light in order to study atmospheric phenomena, transient light events and to detect cascades of cosmic rays.

The entire MiniEUSO device was developed in the Physics Department of Tor Vergata University and in the National Institute of Nuclear Physics section of Rome “Tor Vergata”, under the guidance of prof. Marco Casolino.

Tor Vergata University also collaborates in the experiment of AMS – 02 Alpha Magnetic Spectrometer (https://www.roma2.infn.it), a cosmic particle tracker (brought into orbit in 2001 with the STS-134 mission) designed to operate as an external module to the International Space Station (ISS).

Thanks to the ignition of the new UTTPS (Upgraded Tracker Thermal Pump System) cooling system, the antimatter hunter AMS-02 resumed the data acquisition and will continue studying cosmic rays up until the ISS will remain in operation.

The Alpha Magnetic Spectrometer is an orbiting laboratory for particle physics whose purpose is to precisely study the composition and abundance of cosmic rays in space in search of traces of primordial antimatter and dark matter.

The new cooling system was installed by ESA astronauts Luca Parmitano and NASA‘s Andrew Morgan. For the Italian astronaut, this is the sixth extravehicular mission in his career, the fourth during the Beyond mission.

The result of an international collaboration between 56 institutes and 16 countries, the AMS-02 experiment will allow to study the influence of solar activity on the radiation environment around the Earth, providing for the first time information on the behavior of the different components of radiation to energies not monitored by other instruments in orbit.

Italy has made a fundamental contribution to the realization of the instrument, developing five of the six detectors that compose it, participating in the control of orbiting operations and in the sophisticated work of scientific data analysis.

The mission was carried out jointly by ASI (Italian Space Agency) and INFN, both in the development phase of the instrumentation (2000-2011) and in the current phase of orbit operation and analysis of scientific data.

NOTICE: We use cookies to ensure that we give you the best experience on our website. If you continue to use this site we will assume that you are happy with it.Ok